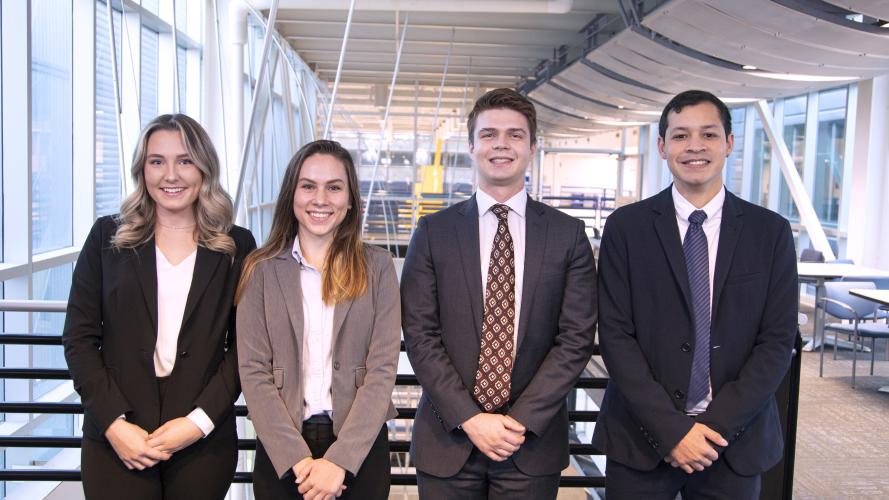 It’s a bird, it’s a plane, no it’s an … asteroid! NASA scientists believe that the asteroid Psyche may be remnant core material from a planetesimal.

Launching in 2022 and arriving in 2026, a NASA orbiter will get a closer look at Psyche and gather information. Scientists are hopeful that this asteroid could provide useful information about the formation of the solar system and the cores of rocky planets like Earth. And potentially, many more proposals for future mission teams landing a spacecraft on Psyche.

We were tasked with designing a spacecraft landing system capable of landing on the hypothesized surfaces of the Psyche asteroid, an M-Type asteroid. Unlike other solar system bodies visited before, the surface of the asteroid is unknown but thought to be uneven, with a mix of rock and metal. The proposed landing attachment will be able to land a spacecraft on the asteroid’s hypothesized surfaces. Our design uses three legs to support the spacecraft. Each leg features a shock absorber to take the impact force of landing.The shock absorber is a piston-like assembly with an aluminum honeycomb-filled cylinder that deforms on impact. To stabilize the spacecraft, each leg adjusts its height independently for a leveled position. At the bottom of the leg is a pin screen foot, modeled after the popular children’s toy. The pin screen toy is known for being able to form to the shape of any three-dimensional relief it is placed on. We believe our landing system that can successfully put a spacecraft on Psyche’s range of suspected surfaces.